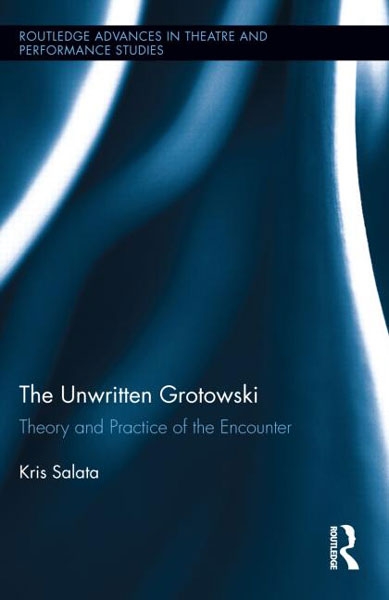 The Unwritten Grotowski. Theory and Practice of the Encounter

This book gives a new view on the legacy of Jerzy Grotowski (1933–1999), one of the central, and yet misunderstood, figures who shaped 20th-century theatre, focusing on his least known last phase of work on ancient songs and the craft of the performer. Salata posits Grotowski’s work as philosophical practice, and more particularly, as practical research in the phenomenology of being, arguing that Grotowski’s departure from theatrical productions (and thus critical consideration) resulted from his uncompromising pursuit of one central problem, „What does it mean to reveal oneself?” — the very question that drove his stage directing work. The book demonstrates that the answer led him through the path of gradually stripping the theatrical phenomenon down to its most elemental aspect, which shows itself through the craft of the performer as a non-representational event. This particular quality released at the heights of the art of the performer is referred to as aliveness, or true liveness in this study in order to shift scholarly focus onto something that has always fascinated great theatre practitioners, including Stanislavski and Grotowski, and of which academic scholarship has limited grasp. Salata’s theoretical analysis of aliveness reaches out to phenomenology and a broad range of post-structural philosophy and critical theory, through which Grotowski’s project is portrayed as philosophical practice.