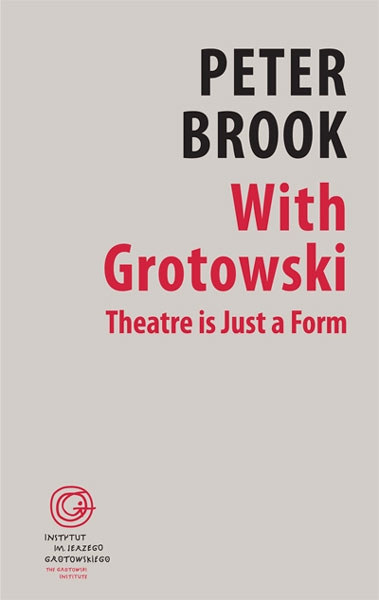 With Grotowski. Theatre is Just a Form

edited by Georges Banu and Grzegorz Ziółkowski with Paul AllainFrom early on, Grotowski recognized the double nature of forms. They conceal, but they also protect the life that is within. For this reason, he set up his own barriers, so as to conceal and protect the work he was doing with his dedicated companions in their well-guarded private space.

When he eliminated spectators from his theatre, and when he refused to allow writers to describe and evaluate his explorations, this was to prevent mere descriptions from replacing the vivid life of actions. And yet Grotowski, a great reader, an encyclopedic man of learning, knew well how essential in human life it is for understanding to be passed on, for there to be a chain of transmission. His quest was not only in a personal need to force the crust of the earth to open so as to reveal the blazing core hidden in its depths. It was also, in his own chosen field of theatre, to guide others, to help them discover in exact, detailed and repeatable ways what laws, what practices make this deep inner penetration possible. In this way, he could develop a craft that could be transmitted directly, from person to person, a craft that examined the relationship between impulse and action, and made their coming together possible. He carefully separated himself from his explorations, so that they could continue one day without him. (an extract from the book)