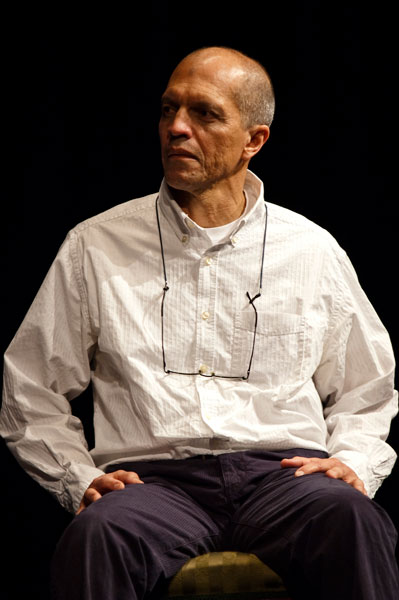 (b. 1951), actor and director. Born in Columbia, he studied at university in Paris where he met Jerzy Grotowski. Following a conversation, Cuesta was invited to participate in the paratheatrical training titled Ver un Mont Parallèle at La Tenaille abbey. In the Theatre of Sources project, which was initiated shortly afterwards, Cuesta became Grotowski’s closest collaborator and took part in expeditions to Haiti and Mexico, as well as participating in further parts of the programme in Poland, Italy and the USA. He was part of the group that created The Vigils. He was one of the most important figures in the Theatre of Sources. Following Grotowski’s departure to the US, Cuesta was invited to participate in the Objective Drama programme, taking on the function of Technical Specialist from March 1985. In order to accept this role he left the group that was working with Peter Brook on the Mahabharata. As part of the Objective Drama programme, he led exercises on Motions and Watching. He was also a member of the group working on Main Action (see: Action). After Grotowski moved to Italy, Cuesta remained in the United States, collaborating with various university theatres there (including directing Samuel Beckett’s Endgame at the University of Akron). In 1992, together with James Slowiak, he founded the New World Performance Laboratory in Akron, Ohio. He remains its artistic co-director to this day, while also performing there as an actor (including in Georg Büchner’s Woyzeck, 1998; Heiner Müller’s Hamlet-Machine, 2000; Love in the Time of Lunatics, 2001; Deathwatch, 2004 and Frankenstein, 2007), while also directing Dybbuk and The Book of Alice. Between 2001 and 2004 he collaborated with the Tratwa group in Olsztyn, Poland, on the project Gildia. He has co-authored with Slowiak the book Jerzy Grotowski (Routledge, 2007).