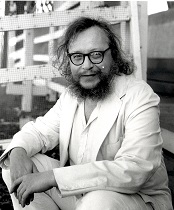 the name of an artistic-research project realised by Jerzy Grotowski and his collaborators in the United States between 1983 and 1992. With Grotowski moving to Italy in 1986, he visited California just once a year (usually in May), in order to advise his assistants on their activities.

The name Objective Drama appeared for the first time during Grotowski’s attempts to gain funding for the programme at Columbia University, New York, where he spent a short time as visiting professor. Eventually a programme with this title was accepted by the School of Fine Arts at the University of California in Irvine thanks, to a great extent, to the support of professor Robert Cohen who also ensured that Grotowski gained significant autonomy as well as substantial organisational and financial support. Grotowski was given a post in the department, exclusive access to a building that was prepared according to his instructions on the edge of the campus together with a specially-constructed wooden yurt, and was also assigned technical and administrative assistants, while his project was classed as a Focused Research Program, ensuring high-level grants. The University’s support also enabled additional funding to be acquired from the Rockefeller Foundation, with these funds connected to the work of the four Technical Specialists.

In accordance with the programme, the Objective Drama project was to work in such a way that the ‘practitioners of ancient ritual arts of various cultures’ invited to spend six months at Irvine (‘Ścisły Program Badawczy “Dramat Obiektywny” prowadzony przez Jerzego Grotowskiego, prospekt’, Pamiętnik Teatralny 1–4 (2000), p. 405) were to train the members of the project’s executive group as well as students and other participants. Among these Traditional Practitioners there were to be ‘masters of ancient liturgy or rituals’ (p. 409), and primarily those in whom Grotowski expressed an interest during the Theatre of Sources period (Huichol, voodoo practitioners and Bauls). However, this plan could not be realised fully. So, due to organisational difficulties, the traditional techniques were taught by Technical Specialists employed in the project: I Wayan Lendra from Bali, the Korean Du Yee Chang, collaborators from the period of the Theatre of Sources (Maud Robart and Tiga from Haiti – voodoo dances and songs; Maro Shimoda from Japan – Buddhist meditational practices and karate; Magda Złotowska from Poland – Motions), as well as practitioners from the United States (Jaleluddin Loras – a member of the Sufist Mevelvi Order from San Francisco).

The Technical Specialists occupied an exceptional position within the structure of the programme. Their task was to record, execute and teach other participants elements of ritual arts, while also acting as ‘super-testers’ who were at the same time learning new techniques whose effectiveness they tested and then worked towards isolating and purifying those elements which were considered objective in accordance with the programme’s guidelines. The success of the entire project depended upon them, hence Grotowski selected Specialists according to a long and scrupulous process before subsequently placing great demands upon them. The four eventually chosen were I Wayan Lendra, who was invited to participate in the project as a result of interviews that took place as early as January 1983 and also served the function of a Traditional Practitioner within the project, as did Du Yee Chang, who joined the group in March 1984; Wei Cheng Chen from China (a member of the Objective Drama group from autumn 1984, becoming a Specialist in March 1985) and Jairo Cuesta, who was named a Specialist in March 1985.

According to the project’s Research and Development Report, the main objective of the Objective Drama project was ‘to isolate and study’ ‘those elements of the ancient rituals of various world cultures which have a precise and therefore objective impact on participants, quite apart from solely theological or symbolic significance.’ (cited in Lisa Wolford, ‘Subjective Reflections on Objective Work’, Grotowski Sourcebook, p. 328). In aiming to achieve this ultimate objective, those carrying out the project led four principal groups of activities. The first was a particular ‘basic training’ which comprised daily Motions together with sets of exercises established on an individual basis according to the level of difficulty suitable for each participant. The second group covered exercises which deepened and expanded concentration, strengthened bonds with surroundings (including Watching, developed by Jairo Cuesta, which was a form of dynamic group games that made reference to The Vigils) and also activities whose aim was the rediscovery of relations with the natural environment. The third group was formed of practical ‘lessons’ on elements of traditional techniques, while the fourth group comprised individual activities connected to personal experiences, with these activities gradually leading to the development of performative structures termed mystery plays. These appeared in an initial form in the work of the group from 1984, while in the following year, somewhat in contravention of the Research and Development Report, these structures became a focus of the group’s work. The mystery plays were initially developed individually before being presented to the remaining participants who would then comment on them, suggesting future directions for work or, on the other hand, might question the point of them entirely. Over time, individual actions were linked, encouraging participants to gradually modify their actions in reaction to a partner’s actions. Finally, from the beginning of the 1985/86 academic year (the year that Grotowski considered the most intensive and productive of those he spent in Irvine) the first attempts were made a creating a collective performance called Main Action. During this time particularly significant changes were taking place within the structure of the group carrying out the project. Until this time, Grotowski, the Traditional Practitioners and Technical Specialists had been working with students from Irvine and other colleges who were selected on the basis of their predispositions, their readiness for effort, etc.

In spring 1985, Grotowski, to the disappointment of a significant number of the participants, decided to reduce significantly the size of the group and speed up work. The Performance Team was created at this time, with the four Technical Specialists as members, as well as Pablo Jimenez (a Mexican who collaborated closely with Grotowski during the Theatre of Sources), David Estrada (a student at Irvine of Native American origin) and two students from Yale University: Midori Nakamura (an American woman of Japanese origin) and Thomas Richards (an American with Caribbean roots). Grotowski’s assistant, responsible for the dramatic structure of the work, was James Slowiak, a director of Polish origin working at Irvine. The outcome of this work was the performative structure known as Main Action, which used excerpts of the Gospel of Thomas and can be considered the first attempt at evoking Action. During the work, Grotowski began to form a close working partnership with Thomas Richards, together with whom in Italy he continued to develop the discoveries made in Irvine. From this perspective, the Objective Drama can be seen as a transitional project, a practical passageway between the Theatre of Sources and Art as a vehicle.

Thomas Richards, At Work with Grotowski on Physical Actions, with preface and the essay “From the Theatre Company to Art as Vehicle by Jerzy Grotowski”, London – New York: Routledge, 1995.