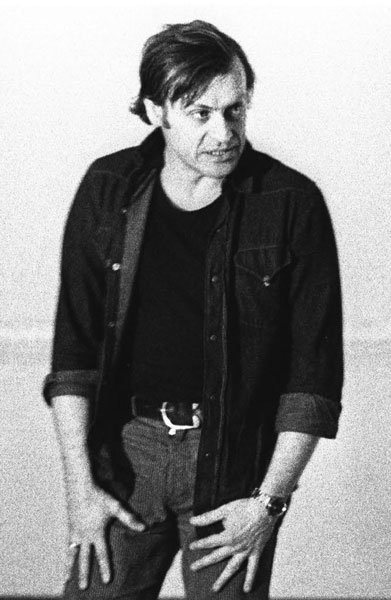 (1938–1987), actor and director. He studied acting between 1956 and 1960 at the State Film School in Łódź. While still a student he appeared in films (including Zamach dir. by Jerzy Passendorfer, 1958, as Zawada), while also making his stage debut shortly before graduating in Michał Bałucki’s Klub kawalerów (The bachelor’s club) at Teatr Powszechny in Łódź in the role of Ignacy Nieśmiałowski. He was employed at the Teatr Ziemi Opolskiej (Opole Regional Theatre) during the 1960/61 season (appearing as Łuka in Tymoteusz Karpowicz’s Zielone rękawice, 30 April 1961), although on 1 May he was officially employed by the Theatre of 13 Rows. His first role there was as Guślarz in Dziady (Forefather’s Eve), followed by Arka Bożek in Pamiętnik śląski (A Silesian Memoir) Within a short time he became the group’s leading figure, a status confirmed by further roles, including the title character in Kordian, Prince Myshkin in The Idiot, Laban and Paris in the first and second versions of Akropolis and Faust in Dr Faustus. During work on the character of Faust, Cynkutis became Grotowski’s closest artistic partner and they had one-on-one sessions. This was highly intimate work which penetrated extremely deep into the actor’s most intimate experiences. It was also the first attempt at approaching the total act. While the attempt was not yet entirely successful, Cynkutis’ performances were generally rated very highly. However, this work exhausted him psychologically and Cynkutis left Opole to work at Teatr Powszechny in Łódź during the 1964/65 and 1965/66 seasons (his roles included Gustaw-Konrad in Dziady, 3 April 1965). In 1966 he returned to the Laboratory Theatre and remained a member of it until is disbandment. Following his return, he took up again his role in Akropolis (in the most famous fifth version) as well as featuring as Muley in the third version of The Constant Prince. In Apocalypsis cum Figuris he developed the protagonist of Lazarus – chosen by accident, the unfulfilled Beloved.
He did not participate in the paratheatrical activities of the 1970s, but instead led actor training in Poland and around the world, while also working as a director. During the 1972/73 season, together with Rena Mirecka, he led training with actors at the Juliusz Osterwa Theatre in Lublin which resulted in the ‘theatrical event’ titled Jałowa (Barren), based on Federico Garcia Lorca’s Yerma (13 February 1973). He continued and developed similar work as part of the Laboratorium Analizy Zdarzenia (Laboratory of Event Analysis) which was supported by the Laboratory Theatre’s Actor Institute (courses took place in cities including Vienna and Pittsburgh during 1973). As a result of this work, various groups were formed in the centres visited by Cynkutis which then created further ‘events’: Arka at the Juliusz Osterwa Theatre in Lublin (closed workshop 12 January – 15 February 1974), Arche II at the Dramatisches Centrum Wien (26 June – 29 September 1974) and Door in Pittsburgh (premiere 2 April 1977). During 1975 he completed his part-time studies at the Department of Directing at the State Academy of Film, Television and Theatre (PWSFTViT) in Łódź. In 1976 he collaborated with Kazimierz Braun, then director of Wrocław’s Teatr Współczesny, where Cynkutis led physical, aesthetic and improvisation exercises with actors working on Anna Livia, based on James Joyce’s Finnegan’s Wake (17 June 1976) and on Bertolt Brecht’s Mother Courage and Her Children (20 October 1976). Cynkutis also directed a version of Ibsen’s Peer Gynt at the same theatre (30 December 1976).
From 1978 to 1980 he was the director of the Laboratory Theatre’s Actor’s Institute. During this period his responsibilities included organising the work of the group carrying out the Tree of People project. In 1981, in collaboration with the Moosach Werkhaus Theater, Cynkutis created the performance Animals (30 December 1981). On 1 July 1982 he was employed as a visiting professor at the theatre and dance department of Hamilton College in Clinton, Kansas. He did not sign the Laboratory Theatre’s act of dissolution. Instead, he accepted an offer from the city authorities to become director of the Drugie Studio Wrocławskie (Second Wrocław Studio), which functioned from 1 January 1985 in the Laboratory Theatre’s space (none of the other former members of Grotowski’s group collaborated with him). He died tragically in a car accident on 9 January 1987 in the Sobótka area near Wrocław.