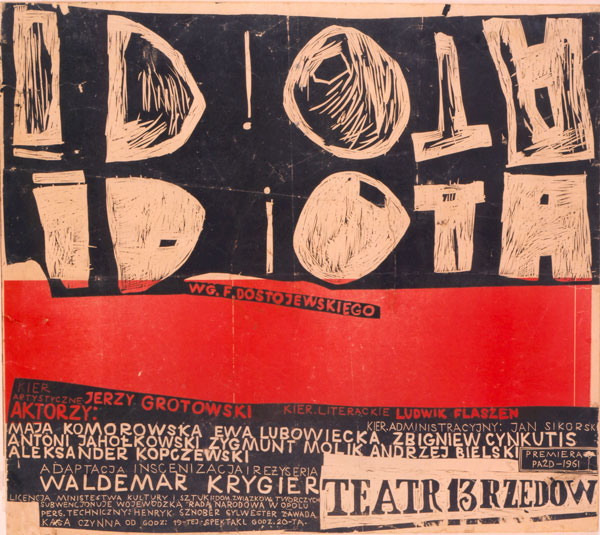 Grotowski had already made known his intention to stage The Idiot – it was one of his favourite novels and, to a certain degree, he identified with the main character (for example, in the text Impresje zapisane w Szwajcarii [Impressions noted in Switzerland] from 1959). It is difficult to say today why Grotowski allowed Krygier to direct it. In his adaptation, The Idiot became a ‘theatrical ceremony’ focused around a table which was both the site for a feast (the particular protagonists were characterised by their manner of eating) and the site for conversations. It was also, however, an altar, thanks to the allusions in the dramatic composition and the performers’ actions. The whole performance was led (or rather, perhaps, celebrated) by the lackey Teodor (Molik) who, at the same time, was also a narrator and someone resembling a hidden, somewhat demonic chaplain (perhaps echoing Witold Gombrowicz’s Ślub [The Marriage]). Together with Maurycy (Kopoczewski) they created a pair of characters who were always active while remaining in the borderland between the world of the action taking place at the time and the audience. The metatheatrical frame which they created was also constructed on the basis of a composition of the performers’ actions which required each protagonist to sit on a bench at the rear of the stage and enter a lifeless pose as soon as the action at the table finished. The whole piece had the character of a general morality play mixed with an oneiric game.

The actors performed exclusively in period costumes with their faces painted white and thus turned into something resembling masks. The transition between scenes was marked by a languid dance to baroque music. The finale featured a dialogue between Rogozhin and Myshkin following the death of Anastassya, concluding with a short burst of laughter (Jerzy Falkowski was highly critical of the entire performance, though he held this finale in high regard). According to actors’ statements, the performance was a success and well-liked by the artists and audiences alike. Critics were divided, with those who were generally suspicious of Grotowski’s performances praising it (Zbyszko Bednorz), while those critical of it were those usually friendly to him (led by Falkowski).

Generally, the acting was rated highly, particularly the performances by Antoni Jahołkowski and Zygmunt Molik. The Idiot was soon taken out of repertory by the Theatre of 13 Rows management. Outside Opole it was performed as a touring production in Wrocław (10–14 and 16 November 1961), Łódź (16 January 1962), Katowice (30 January 1962) and Krakow (22 March and 10 April 1962).