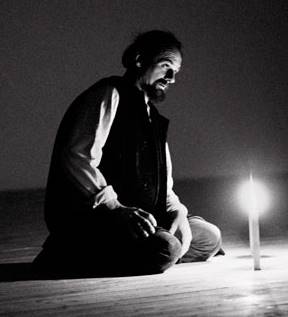 (1931–1981), actor who worked with The Theatre of 13 Rows from the outset until his death. Before working with the Theatre of 13 Rows, he was employed as an entertainment performer and actor at Kraków’s Teatr Rozmaitości, although it wasn’t until 1963 that he gained his formal acting qualifications as an extramural student. He was involved in every performance by the Theatre of 13 Rows and The Laboratory Theatre. He made his debut as Azrael, Death’s Assistant I and Protokolant (the Clerk) in Orpheus. He made successful use of his supreme cabaret talents in Cain (as Adam in the grotesque ‘Dances of paradise’ – interludes performed together with Rena Mirecka), Mystery Bouffe and Shaktuntalā (as Wesołek and the Fisherman). He was able to fully express his talents in Kabaret Błażeja Sartra (Błażej Sartre’s Cabaret), for which he also composed the songs. In Dziady (Forefathers’ Eve) he played the Lord, in Kordian he was Dozorca (Janitor) and Prezes (Chairman), while in Akropolis he played Isaac and the Guard. He also participated in the Estrady Publicystyczne (Journalistic Platform) presentations (Turyści [Tourists] and Pamiętnik Śląski [A Silesian memoir]) and their follow-up Estrady Poetyckie (Poetic Platform – Maski [Masks], Pieśni [Hymns]).

During work on Akropolis, when each member of the group was responsible for training in particular acting skills, Jahołkowski directed the exercises on singing and music. The years 1963–1964 were particularly significant in his development as an actor, since he, firstly, demonstrated outstanding physical and vocal skills in the role of the male Mephistopheles in Dr Faustus before appearing as the King in Hamlet Study. Indeed, it would seem that it was during work on this performance that he found his place within Grotowski’s theatre company, namely as someone suited to playing rationalists and rulers appearing as the antagonists of the sacrificial protagonists (with Ryszard Cieślak usually performing these roles). His two great roles of this type were the King in The Constant Prince and Simon-Peter in Apocalypsis cum Figuris. In the 1970s he took part in paratheatrical activities (including Special Project), collaborated on the training exercises in the ‘Acting Therapy’ cycle, and also belonged to the group creating Tree of People. He gradually took a less active part in the work due to cancer. The final project in which he participated was the work towards the performance Polish Thanatos. His death on 1 September 1981 was one of the first signs of the end for the Laboratory Theatre.