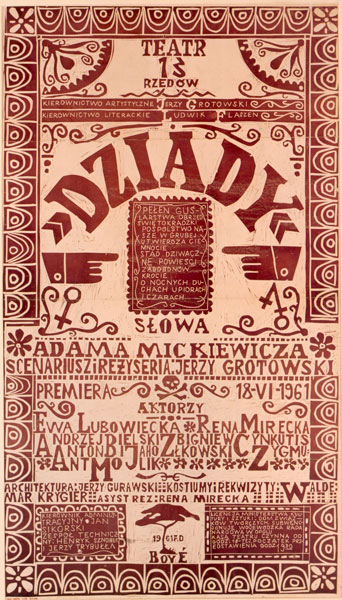 Adam Mickiewicz’s romantic drama, one of the most important works of Polish literature. It is divided into four parts, each created and published at different times: parts II and IV were written between 1820 and 1823, and published in 1823; part III was written and published in 1832, while the unfinished part I was written between 1820 and 1923, and published posthumously in 1860. All the parts of the cycle are linked by the eponymous ceremony – a syncretic, Pagan-Christian ritual in honour of the dead which has its origins in folk traditions and also by the main protagonist who in parts I, II and IV is named Gustaw, while in part III he becomes Konrad. He is a model romantic hero as well as national and cultural hero who takes on the challenging of rediscovering the sense of existence both on the individual level (following the trauma of an unfortunate love) and also the collective level (following the loss of independence). From this perspective he appears as a superhuman character burdened with the redemptive mission of realising a Divine plan in history paid for by individual suffering. His fate is at the same time a message addressed to the nation: the metaphysical rebellion against a God who sends torment and misery (see The Great Improvisation in part III) ends in the defeat of the hero who is saved only thanks to the sacrifice and humility of the Father Peter who tends to the young prisoners.

The performance, based on excerpts from Mickiewicz’s drama turned into a stageplay by Grotowski and directed by him, was first shown at the Theatre of 13 Rows on 18 June 1961. Set design: Jerzy Gurawski. Costume design and props: Waldemar Krygier. Assistant director: Rena Mirecka. Wigs from the workshop of Henryk Tkacz. Cast: Ewa Lubowiecka, Rena Mirecka, Andrzej Bielski (Priest), Zbigniew Cynkutis (Guślarz; the Sorcerer), Antoni Jahołkowski (Dziedzic; the Lord), Zygmunt Molik (Gustaw-Konrad).

Even the script and basic idea of Grotowski’s Forefathers’ Eve were provocative. The bluntness with which the director and scriptwriter treated the text, which is endowed with almost sacred status in Poland (we ought to remember that in the Stalinist period was banned from the stage), caused shock and consternation among many spectators and critics alike. Grotowski removed almost the entirety of part III (generally considered the most important), leaving only The Great Improvisation from it. Meanwhile, he made only minor cuts to parts II and IV, something generally in line with the ‘economising’ procedures regularly used in repertory theatres (for example, removing the Choir of Birds surrounding the ghost of the Bad Lord). On the other hand, he maintained and even accented fragments that are generally overlooked: the motto, the Upiór (the Phantom) poem, or the scenes set in the cemetery and the meeting with the Black Hunter from the incomplete part I. In this way, the focus shifted decidedly away from political and historiosophical themes towards the existential and metaphysical, while maintaining, however, the drama’s fundamental dual unity of ritual and sacrificial transformation of the lead protagonist.

Of particular fascination in Dziady for Grotowski was the problem of the collective formation of rites. In light of this, the configuration of space acquired fundamental significance. Jerzy Gurawski completely abandoned the division between stage and audience, creating instead a multilevel site of performance, where the spectators’ seats were positioned at various angles and at different heights. In effect, audience members, depending upon where they were seated, had a different, sometimes quite limited, perspective. What was important was that they could also see each other. A comfortable and untroubling viewing of the action was also denied by the fact that the actors performed not only in the ‘central space’, where the most important actions took place, but also in amongst – or even with – the spectators. Particularly during the ceremony from part II, audiences members could not feel safe: ghosts appeared among them, the actors touched them, while, finally, Pasterka (the Sheperdess), who ‘sat on the grave’, was selected from the audience (prior to the performance a pretty young woman was chosen and directed to sit in the appropriate seat; if there was no such woman then the role of Pasterka was played by Urszula Bielska, an employee of the theatre). Although the creators of the performance claimed that these procedures were supposed to create a ritual community, they in fact acquired during the performance an air of fun and play associated more often with the cabaret than the ritual theatre (years later Grotowski also admitted that the idea of turning audience members into co-participants was misguided). Nevertheless, by situating the actors and audience members in one space and carrying out some activities in the direct vicinity of spectators, or even involving them in the activities, Dziady ceased to be a spectacle and became a prepared experience, and not simply one that is ‘read’, but one that is directly received, not only through the senses of sight and hearing, but also smell, touch and on the level of reflex reactions.

The feeling of surprise and uncertainty – the most common responses from audience members – was emphasised by the selection of costumes and props, as well as by situational frame created by the artist. This frame – in line with the Theatre’s earlier experiences – was play. The costumes and props were selected according to the principle of creating contrasts between the stereotypical imagination of romantic dress and the trivial nature of objects and materials used to create them. Guślarz and the Priest were dressed in shiny, quilted sheets, while Gustaw-Konrad wore a colourful patterned bedspread. The female actors were also dressed in bedspreads, tablecloths or curtains, beneath which they wore corsets and petticoats. These contrasted with the white shirts with collars raised in the ‘romantic’ style by the men. The props were also ordinary, everyday objects, as if they had just been found in the kitchen or loft. The whole appearance was to create the impression of an amateur imitation of theatre or a ceremony carried out by the merry guests at a party (a similar frame was later used in Apocalypsis cum Figuris). An atmosphere of play was also introduced by elements including the rhythmic, syllable-by-syllable chanting of the 'Upiór' (The Phantom) poem from Dziady in the style of a counting-out game, with those gathered making Gustaw-Konrad ‘it’. The search for ghosts around the performance space, which resembled to some extent a game of hide-and-seek, also had the same effect. The playful nature of the performance meant the opposition between ‘real’ acting (i.e. acting that was ‘experienced’ and emotionally believable) and ‘artificial’, contrived acting was removed.

The actors of the Theatre of 13 Rows, 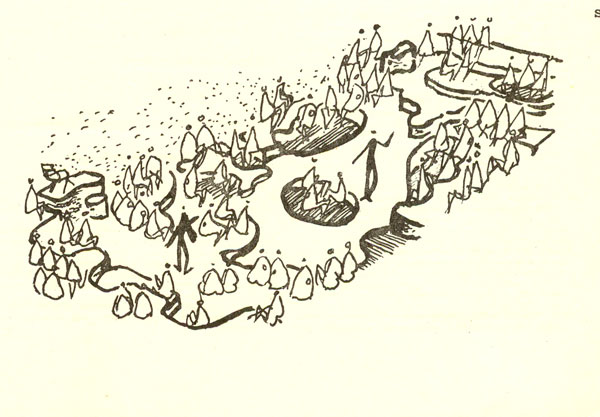 led by Molik, performed in an obviously ‘artificial’ manner, sometimes – as in part IV which completed the second part of the performance – they openly showed off or expressed self-pity (Molik spoke in a treble in this scene). Both in the staging and in the acting, but in different ways, Grotowski created on stage an almost Brechtian ‘alienation effect’, the aim of which was to generate a critical distance, though not in order to become liberated from the romantic attitude, but rather in order to test if any part of it remains alive beyond the ceremonial tone, the pompous decoration, the rhetoric and the melody of diction. From this perspective, the script created by Grotowski can be read as his first attempt at playing out the ‘return of Christ’ in the theatre, something which in later performances acquires the status of a model situation. In assembling the particular fragments of Dziady, he created a dramaturgy of play and fun which gradually transformed into a serious, real game. The main element of it was the history of a strange ‘returning spirit’ played by one of those having fun who gradually went ever deeper into the protagonist (the rebellion against the Priest’s rationalism) before finally carrying out an act evidently signifying a repetition of Christ’s sacrifice. This occurred in the concluding Great Improvisation during which Konrad, played by Molik, assumed poses resembling the Stations of the Cross. But instead of a cross he carried a blasphemously lowly object – a broom, yet his suffering and sense of redemptive mission was supposed to be authentic. In this way an unusually condensed combination of rebellion, torment, humility, blasphemy and grotesque emerged, which Tadeusz Kudliński called the ‘dialectic of derision and apotheosis’. The poster for the performance (designed by Waldemar Krygier) featured a citation from part IV: ‘Pełen guślarstwa obrzęd świętokradzki,/ Pospólstwo nasze w grubej utwierdza ciemnocie;/ Stąd dziwaczne powieści, zabobonów krocie/ O nocnych duchach upiorach i czarach’ (It's full of witchcraft, and this blasphemous rite/ Our folk in their coarse ignorance confirms;/ Whence all strange tales, and myriad alarms,/ And superstitions by the hundred score,/ Of midnight ghosts, of spirits, and of charms.’ Forefathers, tran. Count Potocki of Montalk, 1968, p. 97]. The statement ‘pełen guślarstwa obrzęd świętokradzki’ was from this point onwards used by the Theatre's leading figures as an almost generic description of their artistic objective.