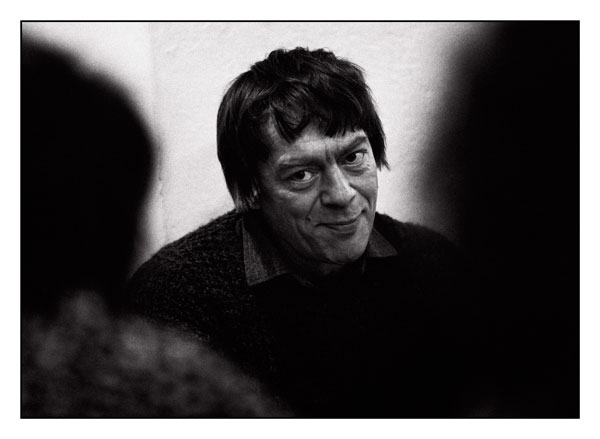 (1937–1990), actor and director. Having completed his secondary education in Kalisz, Cieślak studied at Łódź and Krakow Polytechnics before joining the Puppetry Department at the Kraków State Drama Academy (PWST). It was there that he became acquainted with Grotowski, who in 1961 (officially from 1 October) employed him at the Theatre of 13 Rows in Opole. Cieślak worked with this group until its dissolution in 1984.

The first performance in which he featured was Kordian, playing the combined roles of the Madman 1, Mephistoles, Grzegorz, the Priest and Imagination. Following this, he played Esau and Hector in Akropolis and Wagner, Valdes and Benvolio in Dr Faustus, with a notable performance of the scene depicting Benvolio’s madness (the crazed protagonist turned over heavy wooden tables and dais, something which required both great strength and also precision in order to avoid injuring the spectators sitting close by). At the same time, as part of the Estrady Poetyckie (Poetic Stages) within the Journalistic Stages project, he created the performance Maski (Masks), which was constructed on the basis of texts from the volume Czerwone oczy (Red eyes, edited by Zbigniew Stolarek; premiere 3 January 1963).

During work on Studium o Hamlecie (Hamlet Study) he served as assistant director to Grotowski while also performing the role which expressed, among other things, the question of the Father’s Ghost and Rosencrantz. Soon after completing this work, Cieślak and Grotowski entered a period of close and intensive collaboration connected with the role of Don Fernando in The Constant Prince. The outcome was a great, legendary performance which is considered the first realization of the total act. Presentations of The Constant Prince during The Laboratory Theatre’s foreign tours in the late 1960s earned Cieślak international fame and iconic status in contemporary theatre. Cieślak’s position was strengthened by his participation in workshops, courses and demonstrations led by Grotowski (for example in Nancy, 1–2 May 1965; Holstebro, 15–30 July 1966; London 1–10 August 1966 – this was a course for the Royal Shakespeare Company which at the time was working on US directed by Peter Brook; New York 6–30 September 1967 and Aix-en-Provence 15 April – 2 May 1968).

The 1971 film Training at Grotowski’s Laboratorium in Wrocław (dir. Torgeir Wethal), made in Holstebro, presents a record of Cieślak’s workshop and training work. Between 1967 and 1969 Cieślak, together with the whole group, participated in work on Ewangelie (The Gospels), in which he created the role of The Beloved (Umiłowany), and on Apocalypsis cum Figuris which featured another legendary performance, this time in the role of Ciemny (the Simpleton). Following The Laboratory Theatre’s performances in the US in autumn 1969, Cieślak was declared the year’s best off-Broadway actor by New York theatre critics. In 1972 he became actively involved in paratheatrical work, gradually taking on the function of leading dramatic experiences prepared for larger groups, including outsiders, within what was initially known as the Large Special Project (the first activities under this title took place 20–30 November 1973 in Saint-Maximin in France, followed by Jackaroo Ranch near Dural, Australia, 23 May – 8 June 1974) before being renamed Special Project (the first ‘paratheatrical apprenticeship’ realised under this title took place between 20 September and 4 December 1974 in Brzezinka).

As part of The University of Research of the Theatre of Nations in summer 1975, Cieślak led shortened, two-day versions of the Special Project (on 27–28 and 28–29 June and 6–7 July), as well as his own project Ule (Beehives; 19 June and 3 July). In December 1975, he worked in New York on the film The Body Speaks (dir. John Musilli), which comprises Cieślak’s interview with Margaret Croyden and his commentary on fragments of the film Training at Grotowski’s Laboratorium in Wrocław. Having been gradually sidelined by Grotowski from the experiments that were part of the Theatre of Sources, from the mid-1970s Cieślak began to lead both in Poland and abroad numerous training courses and workshops under the broad title of Acting Search. In 1977 he appeared in the feature film Rekolekcje (Spiritual retreat), directed by Witold Leszczyński (premiere 8 January 1978). Between 1979 and 1980 he was a member of the group within the Laboratory Theatre working on the project Tree of People [Drzewo ludzi]. In 1981 he was in charge of work on the collective piece Polish Thanatos [Tanatos polski] (open rehearsals began on 28 February 1981) – which was to be the Laboratory’s final performance. At the same time, Cieślak was collaborating extensively with European, US and Canadian theatres.

From September 1984, having been invited by Peter Brook, he worked with the international company that was creating a performance based on the Mahabharata, with Cieślak developing the role of the blind ruler Dhritarashtra (premiere 7 July 1986). From September 1989 he was employed as a visiting professor at the New York University Tisch School of Arts.

He died of lung cancer on 15 June 1990 in Houston. Many people believe that his premature death was a result of the psychological and physical devastation he experienced once he was no longer able to work with Grotowski. He is considered Grotowski’s model actor and indeed personified Grotowski’s creative approach to actors which exploits both their deep and active introspection as the basis for creating a precise structure of organic actions of a transgressive nature.