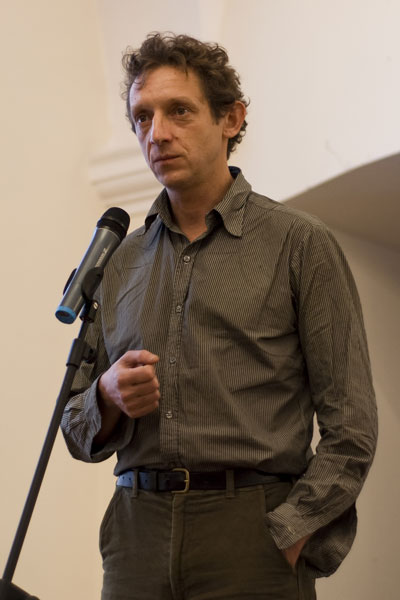 (b. 1964), actor and director, a close associate of Jerzy Grotowski in the second half of the 1980s, considered – together with Thomas Richards – Grotowski’s official successor. He began collaborating with the Workcenter of Jerzy Grotowski in 1986 and soon became one of the most important figures in the group (in 1987 he became, on Grotowski’s recommendation, leader of one of the groups within the Workcenter). He belonged to the group of performers working on Downstairs Action and was one of the protagonists of Action – one of the most significant works of the Art as vehicle phase – which was prepared by Richards in collaboration with Grotowski (Action was performed and developed up until 2009, always together with Biagini). He also worked closely with Grotowski in preparing his Paris lectures and as a translator and editor of his texts. After Grotowski’s death, Biagini together with Thomas Richards led the Workcenter of Jerzy Grotowski and Thomas Richards in Pontedera. Beyond working on developing and presenting Action, Biagini was also director of the project The Bridge: Developing Theatre Arts (1999–2006), the aim of which was to explore possibilities of enriching the theatre arts with experiences emerging from Art as vehicle. He directed and performed in One Breath Left and Dies Irae: The Preposterous Theatrum Interioris Show, also creating a montage for the latter performance. Since 2007, he has directed the Open Program realised by the Workcenter and continuing the activities of The Bridge project. One outcome of this work is performances presented in the past few years and are still developing, which use the texts of Allen Ginsberg while linking various performance forms with actors’ internal work. These performances include I Am America, Electric Party Song, Electric Party and Not History’s Bones – a Poetical Concert. At the same time, Mario Biagini is preparing further publications on the Workcenter’s activities (including its collaboration with Antonio Attisani) while also running various workshops himself.

Workcenter of Jerzy Grotowski and Thomas Richards (the official website)