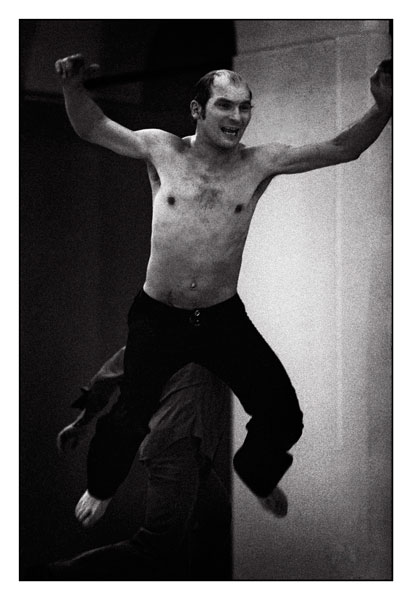 (1939–1983), actor; born in Lędziny, Upper Silesia. In his teens, he worked as a manual labourer. In 1957 he completed his secondary education at a school in Bieruń Stary, following which he took on various casual jobs (he worked as a forester, for example, at Biskupice Forestry Office). From September 1963 to April 1964 he worked at the Regional Office of the Union of Rural Youth (Związek Młodzieży Wiejskiej – ZMW) in Oleśno Śląskie before being employed in September 1964 as a technician at the Theatre of 13 Rows, having been approached by Waldemar Krygier, who had been a colleague at the Student Political Theatre in Kraków. At the Theatre of 13 Rows he was a stage manager, although he also took his first steps as an actor during this time. His first role was as Prince Enrique in the second version of The Constant Prince (premiere 14 November 1965 in Wrocław), replacing Gaston Kulig who had left the group. On 1 February 1966 he officially acquired trainee actor status. In 1967 he performed the roles of Leah and Helen in the fifth version of Akropolis (premiere 17 May). Around this time he was also involved in the work on Samuel Zborowski, which later transformed into the Ewangelie (The Gospels) project, before ultimately resulting in Apocalypsis cum Figuris. During this work he created his greatest role – John. He was also assistant director on Apocalypsis cum Figuris. On 2 January 1970 he received a document confirming the successful completion of a four year apprenticeship at the Laboratory Theatre, which meant that he was now able to carry out work as an actor as a full member of the group but did not have the authority to perform outside it. During the paratheatrical period he belonged initially to the team working on the projects Święto (Holiday) and Special Project. Towards the end of 1973, he began leading workshops in collaboration with Rena Mirecka and Zbigniew Cynkutis, while a year later he established his own workshops known as Spotkania Robocze (‘Working Meetings’) which were carried out in Wrocław (in January 1975 he was officially made Director of the Laboratory of Working Meetings). He was heavily involved in The University of Research of the Theatre of Nations, leading the Consultations, Exercises, Games and Play section (15 June – 7 July, involving a total of 490 participants), Workshop Meetings (20–21 June) and Beehives (Ule; 29–30 June); he also participated in Special Project (1–2 July). In the following years, aside from performing in Apocalypsis cum Figuris, he also led acting workshops and training in Poland and abroad (for example as part of the cycles: Openings – the City of Wrocław and Acting Therapy). In 1979 he was a member of the team working on the Tree of People project, before also participating in the work which ultimately resulted in Polish Thanatos. Between 1981 and 1983 he participated in further training and workshop sessions organised by the Laboratory Theatre. On 18 June 1983 he married Danuta Łuczak, who around a month earlier (22 May) had given birth to their daughter Hanna. On 11 July 1983 Scierski committed suicide, with many people claiming that this was caused by depression brought about by the de facto, though not yet officially announced, end to the activities of the Laboratory Theatre. He is remembered as an individual endowed with an extraordinary sensitivity which exceeded all usual limits. Scierski has been compared to Polish poet and writer Edward Stachura (who committed suicide aged 41 in 1979) and his vital flame was extinguished, as Tadeusz Burzyński wrote of Scierski, ‘when the river in which he was a fish dried up’.